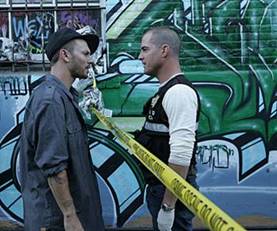 This a picture of Kevin Federline who calls himself K-Fed but is better known as being married to Britney Spears. This picture is from his upcoming appearance on CSI where he gets in the face of one of the regular cast. This episode of CSI can be seen this Thursday October 12th at 9pm on CBS. Don’t know how he will do, but from the preview video clip i’ve seen he doesn’t look too bad.